The other day I had a perfect moment in an already pretty good day.


You know.... one of those moments when you realize that everything is GOOD.  Despite what you hear, it can be good.  Things are fine, peaceful, calm and happy.  When you are suddenly thankful for the moment.  For the small things that make life worthwhile.  When everything somehow comes together to create that moment of perfection.


Standing at the sink:  listening to random selections of music from my computer. Preparing to make a new recipe that I have never tried before.  An upside down caramel apple cake.


Peeling the apples:.  Apples that we had picked from our orchard last fall. September.  The first year that we have had such an abundance of fruit.  The entire valley was filled with an unusual abundance of fruit.  People were begging to give away the abundance because no one wanted to waste the fruit.  We had kept several bushels of apples in the pump house and these were some from September.  Marveling at the ability of this wonderful fruit to still be crisp and golden delicious from months ago.


Looking through the garden window above the sink.: watching the light snow falling over the fields across the river below the bluff.  I could see the geese settling in to weather the storm. Watching them navigate through the snow and landing onto the field below.  So happy to have to have this view of nature and beauty instead of looking at the tired, dirty, soiled backside of another building.

Thankful for my warm snug house:  heat from the Wolf Range preheating adding to the warmth in the house.  Bright and cherry  (even on a snowy day) from skylights and windows that face the sun.


Appreciating the lovely kitchen that my husband and I designed  and built, 11 years ago.  A kitchen where everything is exactly where I want it to be.  Everything at my fingertips.  Spices, flour, utensils.  My kitchen is a well oiled machine.

Anticipating how this recipe might turn out.   Hoping that it will be a "keeper".  Waiting for my husband to come home from YET another hard day of physical and dirty work.  Work that he loves and work that keeps us able to enjoy this life.  I appreciate how hard he works...so now that i"m not making the big commisions in stock trades....I peel the apples.

Listening to the music with half an ear....suddenly it all jelled, when this song played


It had it all.
A perfect moment in a really great day.  Life is GOOD.


AND the cake turned out fabulous.  Here is the recipe on my other blog.

**Added:  I laugh everytime I watch this video because the people dancing are just hilarious.
Posted by Dust Bunny Queen at 9:54 AM 5 comments:

The Universal Train Ride: More musings on life and death

In comments Windbag made the observation that some deaths are just like mule kicks.

We expect that people who are older and infirm are going to die.  It is just the natural way of life.  We have the time to get used to the idea.  Gradually accept that the end is near. The sand is visibly running out.   We can rationalize the death because we have been able to come to terms with it.

You may think: "She was so ill for such a long time it is a mercy."  "He has had a long and productive life full of family and friends. His legacy will live on."  Or even "He led such a terrible life with drugs and alcohol that it is no wonder that he didn't go sooner."      And so on.

It's a kick in the gut when someone young is suddenly gone.  Suddenly.  With no warning.  No gradual acceptance.  Just ...wham...boom....gone.

When I was young, I had a good friend who was pregnant at the same time as I.   (I must say here that I don't have a lot of  very close friends and haven't had very many women friends in my life.  Perhaps 3 or 4.  Lisa was one of those)  We shared the experience.  Our two young families bonded through the experience.  We were like family.

Through the good and bad, we shared the experience. Anticipation of what our babies would look like.  Would it be a boy or girl? Healthy...God willing.   Will my baby be smart, beautiful, handsome, athletic.   Laughed at stories of the physical side of pregnancy. Morning sickness.  Inconvenient bodily function accidents.  We laughed and worried together.  Supported each other and drew strength from each other.

Her beautiful daughter was born just 4 months before mine.  The children played together and became like sisters.

Suddenly, at the age of 30, Lisa had a seizure while driving to work to her job as a nurse in the local hospital..... and ran into a tree.  Suddenly her 2 1/2 year old child was motherless and her young husband was a widower.  No warning. No explanation. Just....wham...boom....gone.

The funeral was attended by friends, who were also in their 20's and 30's.   Each and everyone of us had been slapped in the face with our own mortality. Stunned.  Mule kicked.  The two girls didn't understand, of course, what was happening and continued to play happily with each other, as always.  Unaware that things had changed forever in the wink of an eye.

Watching their innocence, I thought, this could be me.   This could be my daughter who is motherless.  Who would grow up and never know me, except as a story told by someone else.   It could be me who was suddenly gone and I would not have the joy of watching my daughter grow from a baby to a woman with children of her own.   As has happened....did I mention that I am a new Grandmother with a fabulously smart and talented Grandson  :-)

From that time on, I was aware that each moment could be my last.  It could be anyone's last.


So....what does this have to do with the Universal Train Ride?

Get to the point will ya!

We are all on the same train going down the tracks.  Some of us get on at different stops, before or after each other.   We all have different designated stops to leave the train.    Some people, like my friend, have a very short train trip.  Others have a long ride.    However, you never know when your stop is coming up.......until the conductor calls your name.

So....enjoy the train ride, because you will not know how long or short it is or when your ticket will be punched.  I try.  Sometimes I fail, but most often I am enjoying the ride and the scenery.

I wonder what the destination will look like.  I hope it is nice.
Posted by Dust Bunny Queen at 10:21 AM 2 comments:

Sand in the Hourglass

Sad news today.  Andrew Breitbart  is dead at the very young age of 43.  He was a tireless champion of truth and fighting against the liberal media propaganda machine.  But....this post isn't really about Breitbart.  There will be plenty of people who can recap the life and importance of what Breitbart has accomplished and what his work means to all of us.


This post is about something that I and my husband have discussed and have been thinking about more and more as time goes on.  All around us we see friends and family getting older.  Sometimes with grace.  Sometimes not, railing against the enviable and denying the reality of age.  We see our friends and family facing failing health, failing minds and eventually death. 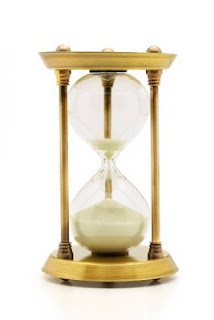 
We are all born with a certain amount of sand in our hourglass.  We have been allotted just so much time here on earth.


It is obvious to us that at the ages of 62, that there is now more sand in the bottom of our hourglass than there can be remaining in the top.   How much sand?  Who knows?  We may have just a few grains left.  We may have many more years of sand to enjoy.


One thing for certain is that the sand in the top of our hourglass is worth more to us NOW than it was 50 years ago.  In those days the sand was something we didn't think about.  There was an endless amount of sand to be wasted and frittered away.


We didn't appreciate the meaning of the sand in the hourglass because it was full on the top.


Now that the sand is running out, every day is a treasure to be appreciated.  We don't have the luxury of being oblivious to life.     Wasting the remaining grains on meaningless anger.   With people you don't like.  On drudgeries that can be avoided.


I plan to use my remaining sand on the little, peaceful things that make me happy.  Spend my grains of sand by being with people that I love.


Enjoying the activities that may not be changing the world or impacting society.  Just appreciating that each day and each grain of sand is a precious gift.


Today: I will read a book.  Bake an apple tart with the remaining summer apples from the trees in our orchard.  Throw some grain to the quail in the snow and from my office window, watch the woodpeckers and great northern flickers enjoy the suet squares in wire baskets nailed to the trees.  Perhaps finish a knitting project and peruse my craft books to plan the next one.  I will call a good friend who is in assisted living, because tomorrow, her sand may run out.


I will enjoy cocktails and dinner and conversation with my husband.  Snuggle together under our warm down comforter with the cat trying to sleep in the middle of the bed while it snows outside.


I will be thankful that we still have some sand left and appreciate every grain.
Posted by Dust Bunny Queen at 9:12 AM 8 comments: