I love and dread the end of summer. 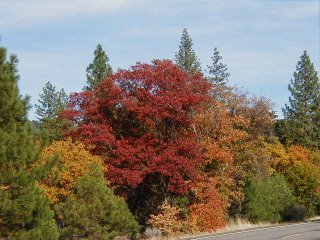 The love part: the nights are beginning to cool down enough to throw a light blanket on the bed. The cat begins to snuggle up and settle down....finally. The trees are starting to turn from green to light yellow to orange and red and we know the leaves soon will fall to the ground and be recycled in the efficent way that nature has devised. I know that winter is just around the corner and I will be able to bring out my cozy knitting craft projects. I will be able to cook in the house instead of creating meals that can be cooked outside on the barbecue to keep the heat outside. Lingering on the deck in the crisp afternoons and early evenings watching the geese and egrets moving southward, with the poignant knowledge that soon it will be too cold to enjoy these moments. The garden plants and fruit trees are groaning with their valient efforts to produce food for us... the patient gardeners.

The dread part: The sun is setting earlier and rising later. The days are getting shorter and I want to savor every moment of beautiful fall color and breathe in the smells of nature beginning to settle down for her winter's sleep. And we have TOO MUCH PRODUCE.

I can't stand to see the fruit and food go to waste and there are only so many zuchinni or plums a person can eat without dire consequences to bodily functions. In the spring it is a gamble on whether the fruit tree blossoms will get to set fruit or be frozen off of the tree by a sudden freeze. This year our plum trees went insane producing fruit. Santa Rosa Plums and Italian Plums, we must have had 50 pounds of fruit. What to do? I get busy canning, preserving, making deserts and freezing for the winter.

Plum jam, canned whole plums, plum crisps and plum cake for the freezer and still to many plums. This year I tried something different for those pesky end of the harvest plums.

In a large saucepan, bring the plums, onions, water, ginger and garlic to a boil over medium heat. Cover and reduce to a low simmer and cook stirring occasionally until very soft. About 30 minutes

Press through a food mill, or puree with a hand blender or other method. Return to a clean pan and add the rest of the ingredients.

Bring to a boil stirring. Reduce heat and simmer until it reaches the consistancy of applesauce stirring occaisonally to keep it from burning on the bottom. About 45 minutes.

Fill and seal in half pint jars an dprocess in a boiling water bath for 30 minutes.

I did this over two nights after work by putting the pureed mixture in the refrigerator and doing the second half the next night. This turned out so good that next year I am making a triple batch.

So I complain about too much produce, yet I am even now planning future crops in our new raised planting beds and what I am going to plant in the half wine barrels that lne our driveway. I think peppers, tomatoes and beans in the barrels.

I am such a glutton for punishment.
Posted by Dust Bunny Queen at 8:00 AM 4 comments: