Swimming in the Past

Lately I've been reminiscing about things in the past. Maybe it is my age...."young, young" my hubby and I always chant when we think about it. But face it. No spring chickens we.

Maybe it is the times we are living in, where we see the America of our youth changing, not to the good, and we see it slipping away. I imagine my parents thought the same thing in the 60's and my grandparents in the 30's. Its a generational thing.

Maybe it is that I'm going to be a Grandmother for the first time and now I'm thinking even more seriously about the next generation and wonder what his/her childhood memories will be like. The idea that Hip Hop music may be the "Oldies" of the future for my grandchild is unsettling.

About the Grandmother thing. YAY!!!! Awesome. I can hardly wait. And I plan to post more about that later.

This post is about reminiscing about the past, so back to my meandering thoughts. On another blog the conversation turned to swimming and which is better. The Ocean or Lakes. I say Ocean is better.

I grew up mostly in California and swimming as children in the summertime was where ever our parents took us.

We learned to swim in summer programs at the local high school. Every day of the week over many summers we would be dropped off for an hour of swimming lessons. Starting with madly kicking our way from one end of the pool to the other behind floaty boards to eventually being able to master the butterfly stroke. Then we would have a lunch break where the pool closed for an hour. My brother and I would walk across the street to the small Mom and Pop grocery store on the corner. We would suppliment our bag lunch with sodas, pretzles, ice cream bars and for my brother the latest edition of The Green Lantern or other comic to add to his collection.

After lunch we would go back and swim for another couple of hours for open swimming. This is when all the kids in the area would ride their bikes in from all over the neighborhoods or their parents would drop them off, pay 50 cents or so to swim. Then we would play and frolic in the water and the sun for hours.

Imagine it compared to today. NO sunscreen, resulting in massive sunburns. No adult supervision other than a few lifeguards. Kids playing and yes bullying, pushing, shoving, dunking without hovering parents or other adults to interfere in the fun. Freely able to wander around the neighborhood. Buy junk food if we wanted. Today parents who allowed these sort of things would be arrested for child abuse. However, we as children LOVED it.

I became quite a good swimmer and was on swim team in high school.

Occasionally, on a weekend, my parents would take us to a company picnic at a local reservoir. Those were fun times but the swimming was terrible. This is where I got my distaste of lake swimming. The only way to swim was to wade out through the weeds, muck and who knows what that your feet could feel on the bottom of the lake until you got out to where you could actually swim for any distance.... if you watched out for boats.

The Ocean is where the real swimming and best summer swimming memories lie for me. As a teen growing up in California if you didn't surf, body surf or at least go to the beach and hang with your friends who surfed, you were a nerd. That word didn't exist then, but the concept sure did. 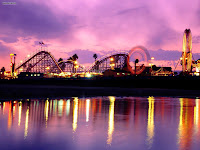 
And of course, warm beer bought by that cool older guy or gal that you happened to know, liquor pilfered from the parent's stash. My parent's later told us, they knew all about it, but figured it was a part of growing up just as they did in the 40's. Rites of passage so to speak. As the 60's morphed into the 70's, beer morphed into other illegal recreational substances and the music morphed into Jefferson Airplane and The White Rabbit, Tower of Power and Bump City.......but enough about that. I'm about to be a Grandmother for God's sake. (smile)

Moving away from the coast to the Sierra Nevada mountians:
I loved to swim in the mountain rivers and streams. The Feather River, before they drowned it under a huge resevoir was wonderful. No crud on the bottom of the river. We would take an ice chest full of food, drinks and walk down steep trails and over flumes to get to the swimming holes and spend all day. You couldn't swim for any distance like I was used to doing, but the water was wonderful to float upon and dive into. Getting down to the river was a challenge. Getting back after a day of 'recreation' was even more so.

Crystal clear and very cold rushing water while the granite boulders were hot from the baking sun and would immediately soak up the wetness from your skin. There were deep pools between the rapids, where the water would be calm and clear. I would dive to the bottom and fluff up the sand and pick up gold nuggets and interesting rocks that had been hidden for years and years. I have a worn down ring that I wear every day that was made from those nuggets and a beautiful rock that I rescued from a deep pool. I've carried both of these with me for the last 30 years.

I look at the rock and imagine the millions of years it took to create it, polish it and wear it down. I imagine the trillions of gallons of water that carved it from a larger shape to what it is now. To me the rock represents time and endurance. Ah....time. 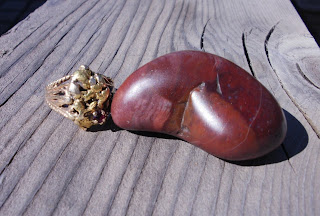 After they drowned the river, we would go swimming in the middle of the reservoir from houseboats or floating platforms anchored off shore. It was strange and slightly erie to think that our previous summer swimming holes were lurking 50 to 80 feet or more below our feet. Never to be seen again. Dark and now covered with silt. Existing only in our memories which will vanish when we do. No bottom anywhere. Just steep mountain sides on most of the rim of the lake.

The memories of swimming. I hardly swim anymore unless we are someplace where there is a pool or we are at the ocean where it is warm. Now when I go out in the sun to swim or to lounge around, sunscreen and hat are the norm. Probably too late to protect my skin from the hours and hours in the sun as a child and youth and young adult, but I wouldn't trade the memories for anything.
Posted by Dust Bunny Queen at 8:14 AM 4 comments:

I Think I Love This Man


Seriously. We need Christie to run for President in 2012. He is exactly what the country needs. Conservative, articulate, common sense, take charge, unafraid.

I'm in awe of his extemporaneous speaking abilities. Notice, no teleprompter, unlike Obama who seems to be a robot reading from speeches prepared by someone else.

Christy puts together a coherent speech that has a beginning, crescendos to a high point and a powerful conclusion. He doesn't use a string of talking points put together like a string of beads. Sometimes I get the feeling that the politicians, Dems and Repubs, have a bowl with little balls in it, like you see at a bingo game, with talking points on each one. Pulling the balls out in random order and string them together to robotically spew the speech dujour.

When Christie speaks you get the feeling that these are things he knows, feels strongly about and understands. He tells a story and, as in this clip, has the audience hanging on his every word.

Hopefully, the American people are tired of pre-packaged political clone candidates that are groomed and controlled by slick handlers. The Hillbuzz guys call them whitebread mayonnaise and cucumber sandwich candidates.

Hopefully we will look beyond Christy's portly frame, his cow licked hair, his New Jersey accent, lack of expertly tailored clothing and see the character of a REAL leader who can pull us from the abyss.

So......shhhhhh. Don't tell my husband that I am in love with this man.....Oh. wait.....I just discovered that my husband is also in love too. Well, maybe not real love, but also wants him to run for President.
Posted by Dust Bunny Queen at 8:22 AM 3 comments: