War With The Robins

Our war with the robins, who are aptly named Turdus Migratorius begins this time of year each year. The little turds are greedy gluttons. 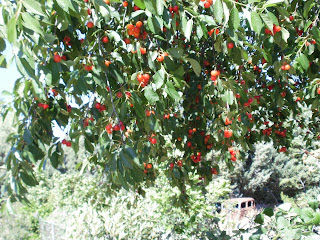 Some years we have cherries. Some years we don't. This year we had a LOT of cherries and it was a race between us and the robins on who was going to get them first. 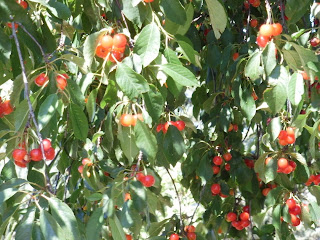 We have several cherry trees on the property. Some sweet and this tree which produces fabulous sour cherries in enormous quantities. The issue is that until they are fairly ripe, they are really really sour. Once they are ripe we have a window of about 5 days to get them before the little Turdus do.

At least the rotten robins didn't get the lion's share this year.

Next......blackberries. I really am a glutton for punishment.
Posted by Dust Bunny Queen at 5:02 PM 4 comments:

California, like many many States, like the Federal Government and like many Citizens, is teettering on the edge of bankruptcy. Unlike the citizens who have to make some hard decisions about what to buy, what to eat, if they can keep their house, if they can keep their car..... the California Legislature refuses to cut back or scale down any of the ridiculous pipe dream projects that the brain dead liberal voters shoved through the referendem process and through the legislature.


They refuse to cut back on entitlement programs, on top heavy beaurocries, on expensive state vehicles for everyone, parties, junkets, useless building projects, redundant departments....>HUGE pension and benefit packages. Nothing. They just refuse. Head in the sand. La lalalalala.

So, my hubby (The Dumbplumber) and I were saying. So what? What if California goes bankrupt and can't pay its bills. How will this affect us. We decided...not that much.

Cal Trans will have to lay off workers

The Highway Patrol won't have time to try to hassle people for not wearing seat belts, cracked windshields and trailer ball infractions. The donut and coffee shops might suffer...but sooooo?

The local Countie Mounties won't be able to patrol our area. Oh...wait....they don't anyway. We have one guy on duty at night for a several hundred square miles area. We are on our own now. How much worse can it get?

Maybe the welfare queens and druggies getting welfare and rent subsidies will either have to get freaking jobs or better yet....move back to East LA where they came from. The truly needy will be helped by our existing support groups of the Food Pantry, Churches and Fraternal Organizations like the Lions and Masons.
The schools may have to lay off some personnel. They will threaten us with the teachers being laid off. Notice that they never get rid of administrative people. However, since they don't teach much now anyway and most teachers are not all that educated in the first place, I think the gap can be filled in with qualified volunteers. We have a plethora of retirees who obtained their educations before the liberals dumbed down the education system.
The local DMV and County regulatory offices may have to close or be pared down. Big deal. They aren't open all the time anyway and mostly exist to make our lives a pain. Maybe now we can build that storage shed without having to pay through the nose for inspections and permits and be annoyed with stupid regulations. Like...... are there any butterflies that breed in the area that you want to build. Seriously. That is one of the studies you have to do before building.
Garbage service. Don't have any available here.
Recycling centers. You must be joking
Water. I'll use my well like everyone else does....thanks.
Fire Department: all volunteers not supported by the county, although they do get some small portion of the property tax rolls.
Cal Fire: Well, now this IS one that I would miss. If we have a forest fire we do use the California Dept of Forestry fire crews. On the other hand, since the Federal Government has seen fit to lock away much of our lands from us and instituted the 'roadless' rule, maybe we should just let the Feds take over this also. Most of our fires are lightening caused. What did the Indians do about fires before the 'white man stole his land'. Nothing. Let'em burn. Guess this is what we will have to do also.
Power. Well, one of the largest hydro facilities is right next door, so to speak, and we have people who have already volunteered to "divert the grid" if push comes to shove. Plus there are several private bio mass power plants that can be "localized" and solar arrays and some wind power farms.
Of course, California, instead of reducing costs, lowering payroll by paring back on useless and redundant positions, policing the welfare rolls and getting illegals off the system and off of our backs.....the Legislature will try to raise taxes even more driving more businesses out of the State or underground. That will be bad because some people may have to move out of State and towns will suffer through a declining population and declining amount of money circulating in the economy. Cash will be king and barter transactions will increase.
So. Go bankrupt California. Not much will change for me. Since the State of California doesn't do much for me now other than take my money .....I'm not going to miss it.
Posted by Dust Bunny Queen at 7:37 AM No comments:

Just When You Think All Is Lost

Just when you think all is lost. That people are so jaded with life. That people have turned inward to avoid interacting with others. Something beautiful breaks out and brings wonderment and joy to the faces of the unsuspecting bystanders.

On Saturday, April 24th, the Opera Company of Philadelphia teamed up with the Reading Terminal Market Italian Festival for a large-scale "Flash Opera" event! Over 30 members of the Opera Company of Philadelphia Chorus and principal cast members of LA TRAVIATA performed the famed "Brindisi" in the aisles of Reading Terminal Market, entertaining hundreds of Philadelphians, and proving that the perfect accompaniment for all things Italian is a little Verdi!
Posted by Dust Bunny Queen at 7:30 AM 2 comments: